Designed on the same principal of random movement and vibration as our ActionDisc,
Swarm Flashers are super tough and trouble free. The ultimate for Salmon, Trout and Kokanee.

Designed on the same principal of random movement and vibration as our ActionDisc, The natural swimming action of Swarm flashers makes them the best Salmon flasher to run meat rigs, hoochies and flies.

You never get a second chance to make a first impression. . .

All flashers are designed to attract fish by representing other fish feeding. When a Salmon charges a ball of bait fish they burst in every direction to escape. The pursuing Salmon selects a single fish and with an instant banking turn seizes it. The resulting broadside flash produced by the Salmon's rolling turn triggers a natural instinct in other fish to investigate. One or more Salmon feeding on a bait ball produce an erratic sequence of flashes as they randomly dart through the bait fish from different angles. Swarm flashers produce randomly timed, single or multiple flashes at different angles. ( watch the "CHAIN GANG" video ) Other flashers produce a single flash with an unnatural shape and mechanical rhythm. flash-- flash--flash--flash--flash. . . Salmon will investigate, but the mechanical aspect of the flash triggers caution.

With other flashers the unfamiliar shape and mechanical movement increases the Salmon's sense of caution as it approaches. The fish may want the bait, but it's typical for it to advance, then shy away several times as it tests the un-natural flasher as a potential threat. The slow advance allows the fish to nibble the bait and often spit it out without getting hooked.

Instead of posing a threat, the Swarm flasher's natural movement and familiar shape of several, smaller feeding fish, triggers a competitive response. The salmon's instinct is to strike the bait before one of the "smaller fish" can get it. The result is an explosive, hook-setting strike.

Won't tangle because it can't!

The odd look of the flasher body (prop) is what our patent is based on. It's designed to keep the chains that mount the blades from ever coming in contact, let alone wrapping around each other. Swarm flashers can be daisy chained together, attached directly to your downrigger ball. 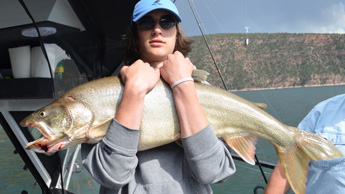 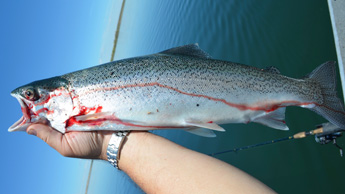 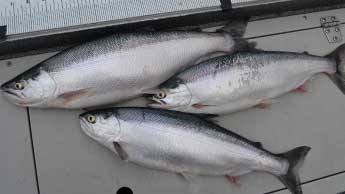 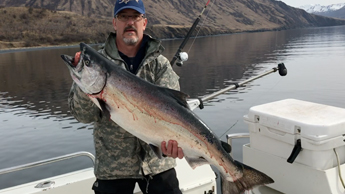 Swarm flasher blades are attached with CrossLoc snaps, making it easy and fast to swap or mix blade colors without even taking it off the downrigger, much less tying on a different flasher all together. 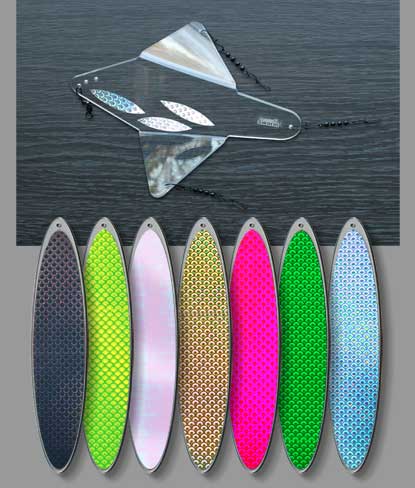 Traditional in-line  flashers are limited to a single angle of reflection. Much like the sun reflection off a car windshield it can be very bright, however... if you are not at the precise angle to the sun you see little or no reflection at all. The blades on Swarm flashers are attached with BeadChain which allows a random path of travel and complete freedom of movement. As the flasher is trolled, this random quality allows the blades to cast reflected light in multiple directions.

Three Sizes to Choose From